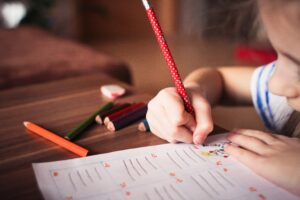 We believe that students are best served by going deep in a few topics per subject matter rather than receiving instruction “a mile wide and an inch deep.” We also believe the childhood years are a time of rapid brain development that is most enhanced through fostering curiosity, wonder, exploration and much reading of “living books.” At the end of this page, we have a list of just such books that we encourage you to consider acquiring for your children, whether you read to them (which we encourage for every age) or they read on their own.

K4/K5: This is a half-day class for non-readers and for those who have not yet socially matured enough to succeed in our 1st-3rd grade class. Parents of K5 children have the option of enrolling them for a full day (where they are incorporated into the 1st-3rd grade class for afternoon enrichment activities). We believe these formative years are not a time for book work but for enhancing curiosity and problem-solving through exploration, games, creative play and social interaction. The students learn phonics and numbers in this way. They enjoy read-alouds, dabble in historical topics and hands-on projects, learn about the five senses, animals, weather (basics), community/self-help (phone number, address, fire safety), observe nature, and spend ample time in unstructured play. During DEAR (“Drop Everything and Read”), the students quietly look at picture books. And during our daily Love in Action, they learn about loving God and others and frequently spend time serving others.

1st-6th: These students are separated into two classes (1st-3rd and 4th-6th) They spend individual time working on parent-assigned curricula in math and language arts with teacher oversight (reading instruction continues at home). We offer a skeletal curriculum in history and science, concentrating on read-alouds and hands-on projects, which parents often don’t have the energy to do, with recommendations of specific books parents can read and discuss with their children at home to fill out the curriculum.

Students in both classes study the same topic, just at different levels, so it is possible for parents to read the supplemental book recommendations to all of their children within 1st – 6th grade with the younger ones gleaning what they can. We believe that having each child cover world history twice at ever deeper levels provides a strong foundation for understanding modern history (1850 to present), which the students will focus on during their 7th and 8th grade years. While most students will not receive the rotation in chronological order, teachers use time lines to denote the particular time period being studied. This practice does not interfere with the children’s ability to process the information chronologically.

The history rotation is:

Year 3: Renaissance through the beginning of the California Gold Rush in 1849

1st – 3rd: Over the three-year cycle the students learn about light and energy, water and air, soil and plants, the solar system, sea and fowl life, land animals, people and our five senses, as well as the local flora and fauna through nature observation.

4th – 6th: Over the three-year cycle, the students go deeper into topics such as physics, robotics, astronomy, electricity, anatomy, and nature observation

DEAR (Drop Everything and Read)

All students as well as teachers, interns, and volunteers spend 20-30 minutes each day reading a book of their choice at a specified time. Adult modeling as well as students engaging in this daily practice helps students form the critical habit of reading.

In their separate classes, through devotionals, stories, and biographies, the students learn about loving God and loving people and learn to incorporate these biblical principles in their interactions with each other. About once each month, the classes come together to hear a guest speaker or work on a service project.

Suggested Living Books to Choose from for Supplemental Home Reading

Blueberries for Sal by Robert McCloskey (and Make Way for Ducklings, One Morning in Maine)

The Little Engine that Could by Watty Piper

The Little House by Virginia Burton (Katie and the Big Snow, Mike Mulligan and His Steamshovel)

The Story About Ping By Marjorie Flack

A quality collection of poems for children

King of the Golden River by John Ruskin

St. George and the Dragon by Margaret Hodges

The Velveteen Rabbit by Marjory Williams

A Toad for Tuesday by Russell Erickson

Books by Clyde Robert Bulla (esp. A Lion to Guard Us, Shoeshine Girl)

Along Came a Dog by Meindert De Jong

Brighty of the Grand Canyon by Marguerite Henry

Chanticleer and the Fox by Barbara Cooney

Five Children and It by Edith Nesbit

Little House on the Prairie series by Laura Ingalls Wilder

Otto of the Silver Hand by Howard Pyle

The Door in the Wall by Marguerite De Angeli

The Pied Piper of Hamelin by Robert Browning

The Story of Doctor Dolittle by Hugh Lofting

The Bears on Hemlock Mountain by Alice Dalgliesh

The Enormous Egg by Oliver Butterworth

The Hundred Dresses by Eleanor Estes

At the Back of the North Wind by George MacDonald

King of the Wind by Marguerite Henry

Men of Iron by Howard Pyle

The Bears of Blue River by Charles Major

The Saturdays series by Elizabeth Enright

The Wheel on the School by Meindert De Jong

My Side of the Mountain by Jean Craighead George

The Courage of Sarah Noble by Alice Dalgliesh

The Remarkable Journey of Prince Jen by Lloyd Alexander

Twenty and Ten by Claire Huchet

Justin Morgan Had a Horse by Marguerite Henry

The Borrowers (series) by Mary Norton

The Chronicles of Narnia (series) by C.S. Lewis

The Peterkin Papers by Lucretia Hale

The Railway Children by Edith Nesbitt

Tree of Freedom by Rebecca Caudill

Mrs. Frisby and the Rats of NIMH by Robert C. O’Brien

The Circket in Times Square by George Selden

The Rescuers (series) by Margery Sharp

A Christmas Carol by Charles Dickens

Across Five Aprils by Irene Hunt

Captains Courageous by Rudyard Kipling (and Puck of Pook’s Hill)

Hans Brinker, or The Silver Skates by Mary Mapes Dodge

Lad: A Dog by Albert Payson

Little Women by Louisa May Alcott

Passion for the Impossible: The Life of Lilias Trotter by Miriam Huffman Rockness

Rifles for Watie by Harold Keith

The Story of My Life by Helen Keller

The Treasure Seekers by Edith Nesbit (and The Wouldbegoods)

Letters from Rifka by Karen Hesse

Little Men by Louisa May Alcott (also Jack and Jill)

Number the Stars by Lois Lowry

Roll of Thunder, Hear My Cry by Mildred D. Taylor

School of the Woods by William J. Long

Where the Red Fern Grows by Wilson Rawls

The Ark by Margot Benary-Isbert

The Bronze Bow by Elizabeth Speare

The Call of the Wild by Jack London

The Cricket on the Hearth by Charles Dickens

The Devil’s Arithmetic by Jane Yolen

The Endless Steppe: Growing Up in Siberia by Esther Hautzig

Twenty Thousand Leagues Under the Sea by Jules Verne